I beat up my boyfriend when he told me he likes sex rodeo style! I asked what rodeo style was and he said "I'll show you". He got in me from behind and then whispered "your sister likes it like this too" - then he tried to stay on for 8 seconds!

Link of the Moment
Actually, lowbrow.com is the link of the moment. An interesting site, people posting their humiliating or just plain dumb moments. You can reload and reload and hardly ever get any repeats. For a while I was amazed at the consistency and quality of the works, but they've been slipping lately, especially with some schmuck who doesn't really get the idea but posts a hell of a lot: "sorry_e_e@hotmail.com". (He (or she) tends to rip off the style of Don Marquis more than e.e.cummings, actually.) Still, I like it because it's generally always an interesting way of spending a few minutes, but it doesn't really tend to suck me in.

from the T-shirt Archive: #18 of a Tedious Series 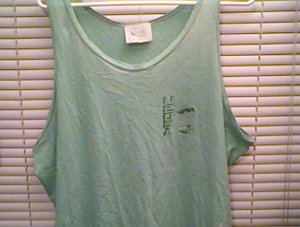 "NEOSA tanktop". Camp Neosa was my summer bandcamp during middle school and high school. (NEOSA stands for North East Ohio Salvation Army.) I had some great times there, from my first girlfriend to the reign of the Water Mafia (I still have the old combined WM logo from that) which is part of why I was so partial to this shirt.