January 6, 2003
Image and New Feature of the Moment 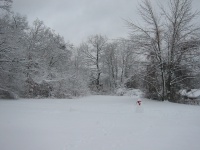 So, this weekend Mo and I made a snowman. I wrote up the story behind deciding to go make it for this month's loveblender ramble. Anyway, this picture I took of it inspired me to finally get a desktop wallpaper page up, with digital pix I've actually used as my desktop background. (Kind of inspired by seeing Ranjit's wallpaper page--there's one amazing shot of his dog Tikko.) Unlike most other wallpaper pages, I decided not to offer the various resolutions. Most browsers/OSes I've used (ok, Windows) seem smart enough to do the resizing automagically.

I like this lonely snowman. The red scarf tells me he's happy.

Rant of the Moment
Do many digital camera owners actually "think" in "megapixels"? That's the usual measure for a camera's resolution, but when someone says "this camera has 2.1 megapixels" it means very little to me, but the horizontal resolution, say, 1024 or 1600 or whatever, that's something I can think about, because most of my experience in fiddling with resolutions is with monitors. (And why is 1600x1200 called "2.1 megapixels"? 1600 * 1200 = 1,920,000. Yeesh.)


We have apple juice champagne in Germany.

News of the Moment
If you're the Bush administration, and you want to do something about all the news of those troubling layoffs, what should you do? cut the funding for the program reporting the layoffs of course! The really amusing thing is that his dad did the same thing when he was presiding over a stalling economy. I guess we'll all have to rely on f'd company for our layoff news.

I heard one particularly scary idea...one Republican dream? Little Georgie in office 'til 2008, then his brother Jeb should be ready to make a run. Yikes! I think we've forgotten how fundamentally weird it is for this country to be run by a not particularly qualified son of a former president. "The Republicans: this country isn't a monarchy, but we're working on it."

Idea of the Moment
Ever wonder what would happen if you wore one of those "Hello! My name is..." nametags all the time? Scott has found out!

Man, I used to hate wearing nametags. If I had to wear one, I'd try to be cool and wear it down low or something. That's so silly. What was I thinking? "How dare you try to label me! Pigeonhole me in a box named...err, Kirk! I'm way too cool for your 'oh, everyone knows each other name and so there's so awkwardness about forgetting' games!"