So I do get to laugh. Our situation, the human situation, is, in the final analysis, neither grim nor meaningful but funny. What else can you call it? The wisest people are the clowns, like Harpo Marx, who would not speak. If I could have anything I want I would like God to listen to what Harpo was not saying, and understand why Harpo would not talk. Remember, Harpo could talk. He just wouldn't. Maybe there was nothing to say; everything has been said. Or maybe, had he spoken, he would have pointed out something too terrible, something we should not be aware of. I don't know. Maybe you can tell me.

Photos of the Moment
Ok, I admit this might fall in the "questionable signs of Kirk's mental health" department, but Mo has a revitalized interest in getting serious about photography (and a new nice digital camera to boot) and it has triggered something competitive in me. Part of it is a philisophical difference about cameras; portable (my favorite, since it's always there for the shot) vs. well, higher-end, and larger.

Anyway, Jane took the first one...we were slacking in the marshy and rocky area at the Salem shore during low tide. The second is a simba head I saw on the street. (I probably attracted some odd looks taking the picture. And The focus was, admittedly, a bit tough to get a hang of.) 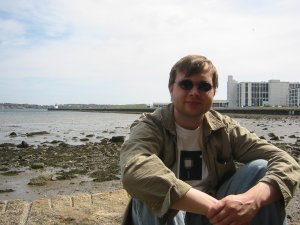 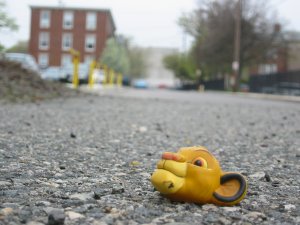 I keep thinking I'd like to take a class in photography, but I'm mostly interested in composition, and want to keep it digital, but it seems like most places that get serious want you to pay your darkroom dues. I know there are reasons to go with film over digital, but still.

Link of the Moment
Retrogaming Times, an online classic gaming periodical, just published its last issue. Some interesting stuff there, especially the Many Faces Of... feature, where they did ratings to see which systems had the best versions of big arcade games.

Story of the Moment
One scene told thirteen times: Always Be Closing. It's a great read, and the gimmick works well I think. It reminds me a lot of this one piece of interactive fiction, Andrew Plotkin's The Space Under The Window.