Did everyone's elementary school have that ultimate "you're dumb insult" where you'd do an "impression" of, say, Mike, by putting a low "dumb guy" voice and saying "DUHHHH, my name is Mike I think...."
I guess it seemed like the sign of true and absolute dumbness was not being able to remember your own name.
--Kirk
(1 comment)
(3 comments)
January 21, 2006
Back from Dallas, safe and relatively sound...

Vague Sexiness of the Moment


The report found that each breast moves independently of the body by an average of nine centimetres during each step taken on a treadmill.

I found it weirdly sexy, in a "10 year old looking at African women in National Geographics" kind of way. It goes on to say that during a metric mile (I looked it up-- 1500 meters, 93% of a normal mile) a woman's "breasts bounce up to 135 metres under their own steam". Yowza! Unfortunately the original article goes on after to talk about the pain, discomfort, and ultimate sag associated with this, but still. I kind of like the "found sexiness" angle of that.)

Web Digression of the Moment 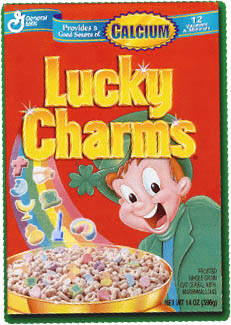 So today's title comes from Unwrap Party, a decently written piece of indecency that I remember from back in the day, where it's mentioned that "Wubbeda" is "the sound of jostling breasts". I remembered the term well enough to Google for it and find the story, along with the sad tale of Mark Wubbeda, no longer allowed to witness for Jesus while answering the phone at work. That site led to this article about short-lived, post-9/11 religious symbol Lucky Charms... "red crosses, yellow menorahs and blue minarets". I think the site is just a big deadpan hoax, but I just love the revision of the old jingle I thought of... "Frosted Lucky Charms, They're Magically Sacrilegious!"

Site Update of the Moment
So, I've upgraded the Comments Spam feature once again... there's this one linkfarmer who loves to have a script praise a site in a effusive but non-specific kind of way, and then have a link to a random theme site (like for certain medications), a blatant ploy to make up their rankings on the Search Engines. Luckily, they're not sure if their potential spamhosts support putting HTML in comments or not, so they tend to have the bare URL followed by the URL in HTML, so I now weed that pattern out.

For some reason this one is very fond of this day's entry. I don't know if that's a particularly Google-juiced page or what.