(5 comments)
December 7, 2006
Yesterday I had a small situation that had a reasonably happy ending, but reminded me why some of my concerns about "intractable problems at work" exist. It's hard to explain without going into details... basically, I have to ramp on webservices, a lesser-used corner of my company's project that this client is interested in. So I started with some example code we had kicking around, but the code was rough, and took a lot of manhandling just to get it in runnable shape. And all through it, I didn't have 100% faith in the system, but I figured I just need to adjust some things that had been hardcoded in order to fit in with my laptop environment, and get a few files that were left out of the distribution, and then just take a look and figure out what was going on.

So I ran into a problem, fixed my code, ran into another problem, tried a few things, fixed the problem, etc. But I ran into a problem I didn't think I understood at all, but probably was an issue with my code, so I asked my manager about it, and he said the symptom was of a specific breed of bug, but he thought they had cleared those out... and indeed, it turns out I was running the test software against a slightly older version of the product. The bug wasn't in the code I was working on but as a result of using an older version of the product.

So problem solved, right? Well sure, but take my manager out of the equation, and I'm potentially beating my head against this error message for hours. Well, frankly it just couldn't be done, not by me in the time frame I had allotted, and not without working up a damn profound knowledge of some sections of my company's product's infrastructure. And that was after I gave up trying to fix my local code, figuring that the problem was most likely there.

This story has an ok ending, but... I dunno. The concept of not knowing if I should throw up my hands or persevere concerns me very much.

Yeesh. If I had been one of those guys who like, played sports in high school, or just in the neighborhood, is this one of the lessons I would have learned? Learning to deal with other teams that are just better, and playing on through situations that may or may not be utterly hopeless? 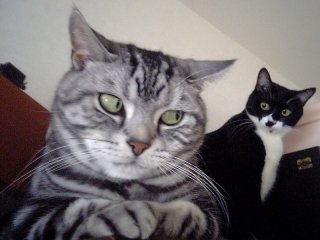 --of all these kitties, this one, sans caption was my favorite. Invisible Bike was pretty amazing though.

A lot of the photos are plays on "im in ur base, killing ur d00ds", here's an explanation... but this page has a different theory about the origin, claiming it was a novice player killing his own forces. It's a more satisfying story, but is that likely to happen in Starcraft?