pretzels for a buck

I will say this: there's a little concession stand at Alewife T-station, behind a bigger news stand and across from the Dunkin Donuts. Last night I bought a big pretzel from it for only a buck. Nachos were 1.50. They also had hot dogs. And I had to wonder... how the heck does something like that stay in business? With prices like that? At Alewife? I mean, that's tourist food and the only tourists there probably misread the T-map. Also, their calendars.

(Not a bad pretzel, not great but ok with mustard, and you could get it without the nasty chunk-o-salts. I kind of dig eating light at night, and that could kind of work from time to time.) 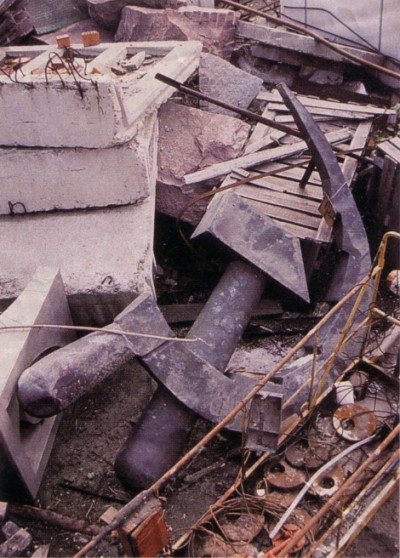 --Illustration from a Igor Malashenko commentary in Time, April 8 1991, "The Third Way: A Soviet strategist argues that while repression is all too possible, it is not inevitable". I saved that page all these years.

Independent of the meaning, and of the symbolic weight and repression and suffering that was behind the beautiful ideals in practice, from a graphics design standpoint I think the hammer and sickle rocks.

It's even funnier if you think of it in that big polished but dumb Phil Hartman voice.

Video Gaming of the Moment
Slate on the casual gaming delights of the Xbox 360... it touches on the concept of "Wii60", that these are two modern systems that complement each other very well. Xbox certainly is a few levels beyond anyone else for online gaming and downloads.