art
One other line from "Fear of Flying" has stuck in my head, and that's Adrian saying "Courage is the first principle" as he cajoles Isadora into running away with him.

(It's odd because a paragraph later she's cribbing Joyce that she knows he won't recognize because he's "illiterate", but their definition seems to be closer to "not literary" than not well educated. I think he might be citing Aristotle, actually, the quote sometimes given as "Courage is the first of human qualities because it is the quality which guarantees the others." (Some translations give 'virtues' for 'qualities'))

I'm not crazy about how the character is using that idea in a bullying way, but as I make my way through daily life, and try to make solid decisions and control my flinching response at work, I think there's something to courage being so central. It's kind of like having a back muscle in good working order; those times when my own back is in spasms, I ain't doing much of anything good out in this physical world.

(And as always, courage is by no means the absence of fear, but rising up to meet it and shoulder it aside and do what needs to be done anyway.) Linify is a pretty sweet art modification program: 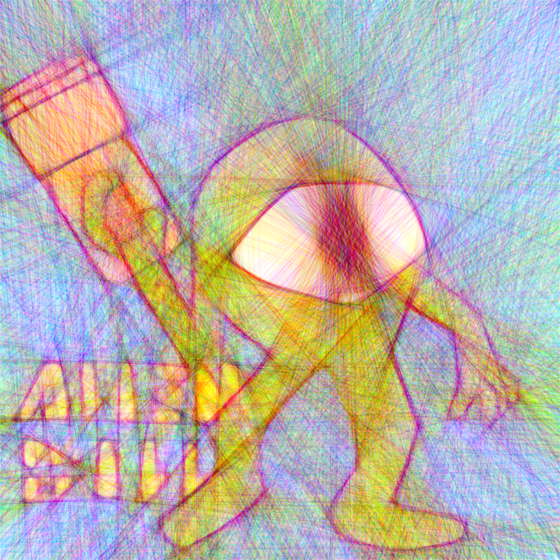 (via Gizmodo where they explain a bit about how it works)

To do this, Hyrule must become more indifferent to the player. It must aspire to ignore Link. Zelda has so far followed a spirit of indulgence in its loving details, a carefully crafted adventure that reeks of quality and just-for-you-ness. But a world is not for you. A world needs a substance, an independence, a sense that it doesn't just disappear when you turn around (even if it kinda does). It needs architecture, not level design with themed wallpaper, and environments with their own ecosystems (which were doing just fine before you showed up). Every location can't be plagued with false crises only you can solve, grist for the storymill.

I got this from Derek Yu's Bossfight book about his own game "Spelunky", a brief, thoughtful work. I also liked his Miyamoto quote: "A good idea is something that does not solve just one single problem, but rather can solve multiple problems at once."

Anyway, Thompson's point resonates so deeply with me. It's certainly not the only way a game can be, but the ones that go out of their way to put the story (if any) in a world that feels like it would be there anyway cut some of the deepest places in this gamer's heart. To quote the game Soul Calibur, "The winds blew and the clouds moved on as if they were oblivious to their mortal plight." The Spelunky book mentions my friend Darius' spelunkyGen, a chrome-based tool that makes its own Spelunky levels, along with an explanation of the process.

I've thought about Gwen Stefani being older than Ted Cruz every day since I heard that information.