It's sort of weird being a "side-sleeper". You're lying there on your left side, all snug in blankets and maybe a body pillow, and your body is like "you know what? sure, this is great and all, but you know what would be REALLY great? This same thing but on your RIGHT side." So you shift over, dragging all the pillows and blankets over and re-settling in, and eight minutes later- "you know what? .... " So, there's another attempt at a kind of minor league for football, the AAF. Besides making some smart rule changes to the NFL setup, they made a whole set of 8 teams... I've always loved new team logo/branding (here's some I invented as a teen and then redrew 15 years ago for a "CyberWar League") getting some flavor of the city or region while being all tough and cool, so here's a link with all the new teams and logos: 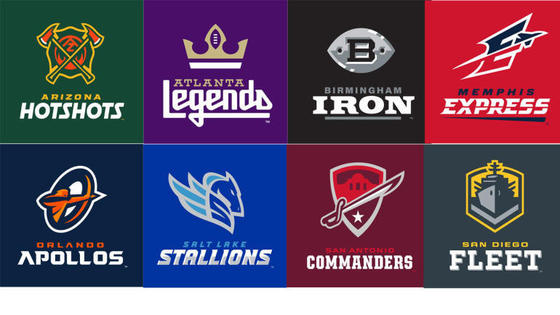 There's a certain sameness to the logo treatment - I guess lacking the diversity you accumulate when teams get added and rebranded over decades, but overall pretty cool.

Slate mentions some of the rule changes and talks about the XFL and the USFL (but doesn't talk about NFL Europe which I thought was an interesting one.)