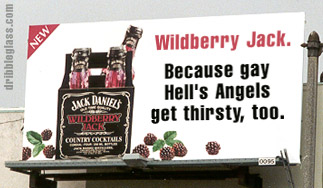 Man, I hate Harley Hogs. (Or is it "Hawgs"?) A machine that takes so much joy in being so disruptive to everything around it is just obnoxious. After one rips through my neighborhood, I try to restore the karmic balance by mocking the breed... this is easily accomplished by holding out one's hands as if they were gripping handlebars and then turning one of the hands to mime the twisting of the throttle, synchronized with making the fart noises an eight year old takes such pleasure in. (The syncronization is the key to the gag.)


I've seen monkey shit fights at the zoo that were more organized than THIS.

Link of the Moment
As long as we're in a cussing mood here, it's Fucked Weblog, a kind of functional parody of FuckedCompany. The latter tracks dotcoms going down in flames, (like this report on Event Zero, where I used to work) while the former reports the shutdown of web based journals.

Blogs come and blogs go, hopefully this one will stay for a long while; I consider it a continuation of the quote journal I kept on my PalmPilot since early 1997, so there's some hope I think.