money and miller and men and women


>  in other news, i am trying not to worry
>about having no money at all.
They say money is the root of all evil but being that "virtuous" sucks ass. I think an artist can pretend he or she is "living like Henry Miller" for only so long before that idea wears really, really thin. 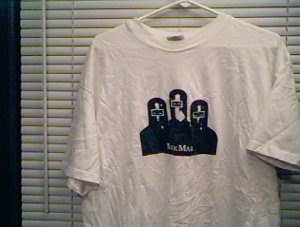 "Blue Man". From the Blue Man Group show, probably when I saw it NYC with Marnie, circa... 1994 or so, give or take a year. Back when making fun of the flying toasters was kind of fresh. I've gotten another, better Blue Man shirt since then. This one is odd, it's a minimalist image of them behind their welder's masks.

News Link of the Moment
From Salon.com, studies on what men and women look for in a mate. With women it's smell, which puts me in pretty good stead I think, though I'm a little worried about that 'ambition' thing. (Oh, and in another Salon piece, let's hear it for minimum sentences! Nothing like the legislature sticking its nose where it JUST DOESN'T BELONG. Cut judges some damn slack! Foolish liberals try to restrain "Maximum Bob" style punishment and all the stupid conservatives can see are judges who are "soft on crime".)