shirts
July 14, 2001
Moral Issues
Heard this on the BBC on NPR Friday morning, couldn't find it on the US Wire Service: France upholds 'right not to be born'. "France's highest court of appeal has ruled that disabled children are entitled to compensation if their mothers were not given the chance of an abortion.", the families argued that the doctor's had not acurately diagnosed the children's condition. A rather disturbing factor is how the lawsuits are being brought in the name of the children, rather than of the family. Over all the issues are so weird and complex that I can't wrap my head around them.


Recently I was on a carnival ride called "The Drop Zone" with my nephews when I saw a similar Windows error message.

The Drop Zone is rather fun. They strap you in the ride, you are lifted to the top of a tower, about 100m from the ground. There are computer screens at the top which give you a narrative about how some spacecraft is going down and the whole crew are going to have to bail out, and then they drop you. You experience free fall for a few seconds. The kids scream. You land safely.

The second time we did the ride, we got to the top and Windows had crashed. This time it was my turn to scream...

from the T-shirt Archive: #8 of a Series 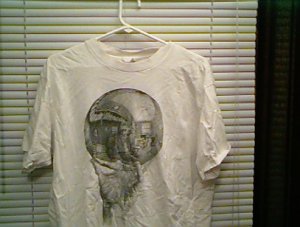 "Hand With Reflecting Sphere". A lot of geeks have an Escher shirt. I thought this shirt, by having a single Escher image, was much classier than the ones that had like 6 images all around the shirt.