Geek Link of the Moment
Slashdot linked to a GameSpy Top 50 games. Interesting commentary from people in the industry.

Auto Design Ramble
There's this new model Volvo out, and it took me a while to figure out why the design of the rear of the car, specifically the tail lights, was bothering me so much: 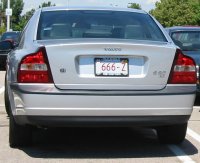 Then I realized it was because of its resemblance to the cross section of a human, as in the Visible Human Project:

The car makes me think its back end has been chopped off a bit. It just ain't right.

The Visible Human project is very neat, with movies starting from the head and moving to the toes, one thin slice at a time.

Interestingly, Hollow Man was on last night, which had some terrific effects of Kevin Bacon and before than an ape turning invisible, with different organs and skeletal structure visible as the process went on. (Though we saw a bit too much of Kevin Bacon's Bacon, if you know what I mean.) Then in turned into a standard "5 people trapped in with a psychokiller, who do some smart things and some dumb things and most get killed" horror flick.