shirt
August 24, 2001
I had a brilliant but completely unworkable idea yesterday...wouldn't it be great if there was some kind of slashdot-esque moderation/rating system for drivers? Like, if someone does something nice, you could beam them a point of good karma? Or subtract a point if someone was being a jerk? And you could somehow see someone's rating, on their car? There are many reasons why this system wouldn't work and would be abused, but still, it seemed like a good idea. Sigh, I guess polite driving has to be its own reward.


There's a lot to be said for a lack of communication and so many problems we can't talk about simply go away after a while, such as the problem of mortality, for example.

Link of the Moment
This was in slashdot the other day: A Physicist with the Air Force in World War II. I appreciate his cleverness in math, materials, and psychology. Makes me wonder what similar stories there were for the 'bad guys' as well.

from the T-shirt Archive: #17 of a Tedious Series 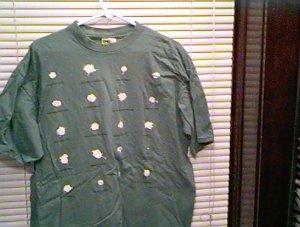 "Birdpoop". A friend gave this to me. Various bird poops, all labeled. A bit too tacky too actually wear, but...err...a nice color at least.