This is from Nostradamus, I think it's a bit vague, but don't you think he might have been predicting what happened the other day?

I'm really excited about this!

On Tuesday, some Arab maniacs will hijack the American Airlines plane
There will come a mighty rending as they open boxes with box-cuttters
President Bush will get hot buttocks
The whole caboodle will hit the world trade center with a massive bang!

Don't you think that's uncannily accurate? I do! It's amazing isn't it.

A sad cunt who'll believe anything. And I mean fucking anything.

It only really makes sense if you know the fake Nostradamus prophecies that were going around.... 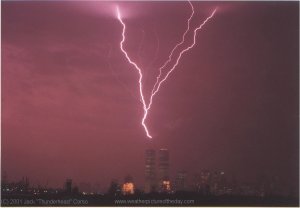 Click for Fullsize
A while before the tragedy, from Weather Picture of the Day

More Links
I know my mom isn't too keen on me posting stuff like this, but here's a piece where Richard Dawkins blasts Abrahamic religion, that even the 'good' type of it sets the stage so that the others could talk them into the glory of martyrdom. (via Bill the Splut's news, where the he's run through some chilling scenarios recently.)

Operation Desert Storm, Operation Just Cause (or 'Just Because' as some quipped at the time), Operation Overlord, how they come up with those names.(via memepool)

A view from a Afghani-American writer that's been going around a bit, though maybe not enough.