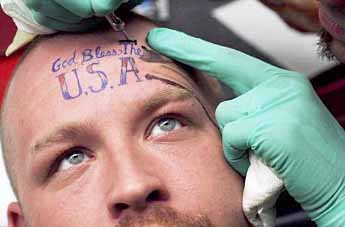 --from a St. Petersburg Times article on patriotic tattoos. Two telling quotes: "It's painful" (Jack Hansen, shown above) and "Tattoo shops haven't seen a boom like this since Dale Earnhardt died, and people wanted the number 3 and 'Intimidator' scrawled on their bodies."

Concepts of the Moment:

Wabi: a cozier, more object-centered aesthetic of less as more.

Wabi-Sabi: As a single idea, wabi-sabi fuses two moods seamlessly: a sigh of gentle melancholy, and a sigh of slightly bittersweet contentment, awareness of the transcience of earthly things, and a resigned pleasure in simple things that bear marks of that transcience.

via Fifteen Megabytes of Fame - Amy Rosenthal finally found a name for the concept of the feeling she had.