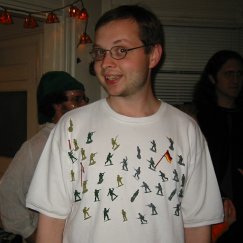 This was my halloween costume at Brooke's party, made from an idea I had two years ago, and with a lot of help from Mo, who did most of the sewing work. I was "The First World War". You can see the Yanks and British Doughboys on the left, and the Germans on the right. The flags for the three nations aren't exactly historically accurate, but whatever.

Combined with my triumph at deciding to go to 256 megs from 64 for my desktop system and getting it done, it was a pretty good day. Hmm, I think this system now has about twice as much memory as my first PC had diskspace. (And this is a cheap-in-1999 Pentium II system...)

Halloween in the 1980s
Man, there were some Bad Children's Halloween Costume in the early 1980s. Even back then, I thought it was really dumb to dress up as a character but have that character's face plastered all over your chest as well. It totally broke the spirit of the deception. This page is laugh-out-loud funny in parts. (via memepool)

More Halloween Spookiness
And I thought Mo's cats were scary...