November 28, 2001
Ever notice those "floaters" in your eyes? The little darkened flotsam and jetsam floating in your eye? Usually they're most obvious when looking at a large expanse of a light color. This summer I was getting really paranoid that they were getting worse, and some days do seem worse than others, but I don't think it's quite the traumatic thing I felt it was earlier.


Screw destiny! Destiny's just another word for inevitable. And nothing's inevitable if you stand up, look it in the eye and say, 'You're evitable.' 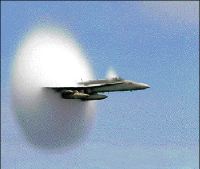 A sonic boom caught on film, via this article. It was a "one in a million shot" by Navy photographer John Gay. Well, that's the official story anyway. I suspect it might actually be a battlefield scene where our jets are being attacked by Giant Airborne Eggs from Space.