things you find while getting ready to move 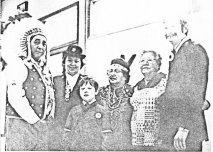 SALAMANCA, NY -- Captain and Mrs. James Israel were adopted into the Seneca Nation of Indians recently. Mrs. Israel was adopted by George Heron of the "Hawk Clan" and Captain Israel was adopted by Mrs. Harriet Pierce of the "Bear Clan." Pictured are Mr. Heron, Mrs. Captain Israel, Kirk Logan Israel, Mrs. Helen Harris, representing the Hawk Clan Mother; Mrs. Pierce; and Captain Israel
--The War Cry, March 27, 1982. The War Cry is the periodical of the Salvation Army...I remember making a nest of blankets in the back of the Station Wagon as my parents drove around doing the "Tavern Route", selling "War Cry"s. This clipping was unearthed by my cousin Scott Bedio, who is a Salvation Army historian. I've always tried to figure out if this makes me an adoptive member of the Seneca tribe or not...


"All I'm saying is that people who say 'irregardless' are TOTAL CRETINS!"
"LOTS of people say 'irregardless.'"
"That's exactly my point! 'LOTS' of people ARE cretins!!!"
"Look: just because a person doesn't have "BOOK SMARTS" doesn't mean he or she is STUPID! That newscaster might have a lot of EMOTIONAL intelligence!"
"May I inject one teensy-weensy thought?"
"Go ahead!"
"Emotional Intelligence is CRAP!!!"