Rainy day in San Diego... rare as many of you know. And when I lived in my apartment I loved rainy days. Perfect excuse to stay inside and wallow in whatever self-pity I could muster up. Ideal for hot beverages and reflection on my sad state... blah blah blah. Now that I own a home with a questionable roof, I really do wallow in self-pity and my sad state. I can't enjoy the depressing pitter-patter of raindrops on my roof because I have a neurotic fear that the dreaded leaking will begin.
--Dylan
(4 comments)
February 11, 2003
Quote of the Moment


Show me a man who does not, on occasion, allow his beard to grow and I'll show you a man who cares more about what society thinks of him than of what he thinks of himself.

Woohoo! More of an excuse when I decide to go a few weeks (rather than my usual one...) without shaving. 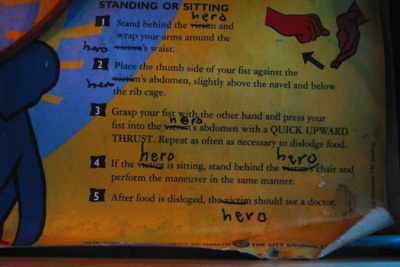 --Photo by Ranjit, in New York City. I think I understand what the defacer of this poster was getting at.

Middle East Essays of the Moment
Foreign Affairs on Palestine, Iraq, and American Strategy. The core idea is that the Palestinean issue is a powerful symbol used in Middle East politics, and an important one, but the answer isn't "deal with Palestine first". Another interesting but scary article: Is The Currency Oil is Traded In the real reason for this whole Iraq thing? Iraq made out like bandits by switching to the Euro before it started its recent huge gains against the dollar. If OPEC followed suit en masse, the result could be a dollar devaluation mess on a third world scale.

Heh. It would be funny (ok, not ha ha funny) if that was one of the reasons why Euro-using France and Germany are against the war, and the UK is for it. (Don't know what the pound/dollar relationship is though.) Anyway, MetaFilter, where I got this link from, had some followup discussion where people who are better informed than I am (or at least better at pretending to be) have some comments.

Link of the Moment
Another webpage that reads your mind. Amazing! The Dept. of Homeland Security should get this technology and use it to weed out terrorists!