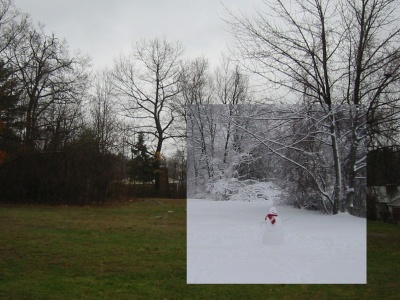 --The Ghost of a Snowman. Inspired in two ways by Ranjit; it's similar to some photos he took in 2001...and his offer of being a guest poster for the April Fool's edition of his site Moonmilk got me to make some shots I had taken more presentable, so click that link for more and larger images. (A fullsize version of the original snowman shot on my wallpaper page, which was also inspired by a page by Ranjit. He rocks!)

Current Events Link of the Moment
The Iraq-O-Meter, for all your at a glance war stats needs.

War Analysis of the Moment
Slate.com has two pieces that, together provide some insight to the thinking behind getting ourselves into this war. The first is What Was Rumsfeld Thinking? and it argues that Rumsfeld tried to lowball the troopcount in order to prove neoconservative thinking about the effectiveness of smaller and lighter forces, as well as demonstrating a more credible simultaneous threat against "the Axis of Evil", Syria, and heck, lets throw Saudi Arabia into the mix too. I guess one sliver of silver lining is that if this is a quagmire, the administration is likely to not be as hawkish as it would be if the "regime crumbling" scenario won. Of course, from the neocon point of view, it makes as look less strong in the world. Think it might bring us to to something closer to a "humble foreign policy"?

The other article gives some of the background to the Iraqi force being "a bit different than the one we war-gamed against." I remember hearing about the armed forces wargames last summer, and how the commander of the "bad guys" quit, because he was overly constrained in the tactics he could use, his strategies overridden by the staff running the game. We're such idiots! We broadcast how we're going to invade, how much it's going to hurt if we don't get our way, and then we're surprised that the Iraqis don't want to follow all the rules we expect them to?

War Quote of the Moment

For more pessimism, Bill the Splut linked to this article tal about how numbingly difficult it is to fight in cities.