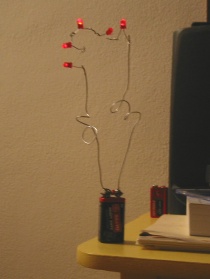 So yesterday I went to a workshop run by the Jackal art group. They're into scavanging technology and subverting and repurposing it. The workshop took a while to hit its stride but was good once more participants showed up. I helped make some "stomp pads", electric switches made of cadboard, foil, tape, and foam, that they were wiring up to a PC to do sound effects. (They also had a kids toy electronic guitar wired to video clips of Guitar Gods, so you could play random clips as well as speed the clips up or down.) I also made an LED "light sculpture" for Mo that you see here; 9V battery, battery socket, wire, LEDs. Supposedly if it was just one LED it would be at risk of the LED blowing up, hopefully five should be ok. Man, I hadn't soldered since the gifted and talented special class in fourth grade! (Thanks Ranjit, who passed me word of their Boston Cyberarts workshop; he was thinking about going but decided not to, but dropping his name worked pretty well too.)


"I'm Jewish and I was watching (Tomb Raider) and thinking there are no Jewish video games. Well there's one, Quicken, but that's it."

Articles of the Moment
We're at the 25th anniversary of the first e-mail spam, and Brand Templeton has a lot to say on the stuff, including a good quick history of the use of the term. I'm glad I finally got my "whitelist" system working.