July 2, 2003
Article of the Moment
There's research that suggest cats vocalize mostly to humans, that it's really an adaption to living within a human world. (And lo and behold, here comes Murphy now. Actually, one of my first entries here was all about that cat and his vocalizations...)

Article of the Other Moment
Huh, Slate.com talks about how Strom Thurmond may have had a daughter with a black woman. Interesting, puts a different light on some of the events of his life. 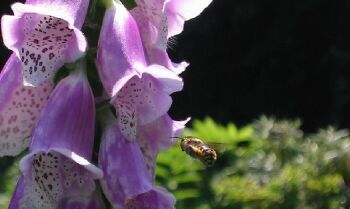 --Ranjit took this awesome picture of a bee, you can see a slightly larger version at moonmilk.

Hobby of the Moment
I really think that dB drag racing is the dumbest hobby I have ever heard. People put tons and tons of amplifiers and stereos in their cars - often rendering them usesless as a means of transportation - in order to make as much noise as possible. Not play music, but noise, a 74hz tone. That's, like, enough to melt your brain, literally. I mean, I guess it's a little interesting from a street engineering standpoint, but yeesh, what's the point? (And I guess my feeling ties into the most people's dislike of car stereos that rattle windows from blocks away.)