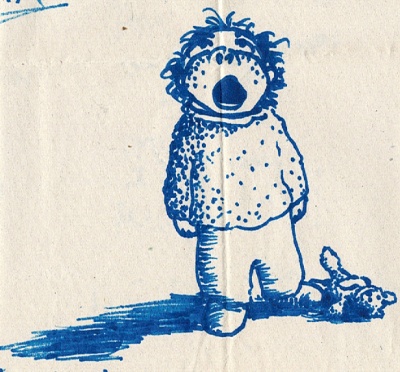 --a while back I posted some new art by Carly R., who was in my dorm one year at Tufts. Back then I would put up sheets of newspaper-type paper instead of the usual dry-erase board for leaving messages, and sometimes Carly would leave me drawings. (The child is aghast at the F-word some had written above...actually, it may have been Carly mentioning something she overheard someone say in the hall.) It's such a neat picture, such good shading, the teddy bear, the expression, even the pose of the legs. (This marks me find this giant binder I had put in all my papers I had saved from high school and college.)

Analysis of the Moment
Predicting the next big IT failure is about how some companies, by being the market leader at the top of their game and catering to the highest level of demand, become vulnerable to upstarts offering cheaper "good enough" solutions. When it comes to my profession, I see so many instances of over-engineering for the task at hand, thinking it's cheaper to buy an expensive off-the-shelf solution that can be then mangled to do the job just right rather than doing it from scratch...(I'm a big fan of the latter approach, for reasons both good (I really think it's the best approach) and greedy (it's also what I most enjoy doing.))

Geek Link of the Moment
From Slashdot, Before and After (well, "During") satellite pictures of the blackout.

Advice of the Moment


Kids, your birthday only comes once a year. Don't waste it on a metal detector.