Arnold Shwarzenegger. Finally a candidate who can exaplain the Bush administration's positions on civil liberties in the original German.

Query of the Moment
So in my quest for healthy-ish foods I can eat and not worry too much about eating I've stumbled upon that dieting cliché "cottage cheese". I think it's quite tasty. What's funny, though, is that there seems to be a difference of opinion about whether it's something that goes well with sweet, or something that goes well with savory. For instance, if you go to the supermarket, they have premade cottage cheese blends; most are with various types of fruit, but the ones I like have chive or black pepper. (Which Mo think is really rather weird.) It might be like grits/oatmeal etc, where people down south eat that stuff with salt and butter, and Yankees pour on the sugar. So, a question for today's comments section: is cottage cheese mostly something to go with sweet, to go with salty, or does it go just about as well with either? 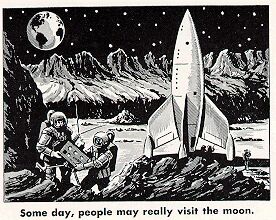 Gallery of the Moment
Space Art in Children's Books is a terrific thing to browse, visions of the future from 1883-1974. If you're in a hurry, just take a second to check out the cool spaceplane in 1930's "Other Worlds Than This", this striking illustration from 1957's "Planets, Stars, and Space", the clever spacesuit toe-claws from 1959's "Space Flight: The Coming Exploration of the Universe", and some boisterous scenes from 1961's "America's Astronauts... Conquerors of Space!" (This scene here is from 1950's "Sun, Moon, and Stars".)

On the other hand, the front page's quoting of Wyn Wachhorst "Soon there will be no one who remembers when spaceflight was still a dream, the reverie of reclusive boys and the vision of a handful of men" is a little poingnant, given how so many parts of that dream have gone unfufilled. If we're not careful after a while there would be no one who remembered when landing on the moon wasn't just a dream! But maybe with India and China in the picture a bit of the Space Race will pick back up.

Article of the Moment
Bill pointed me to Harper's The Revision Thing, the story of our conflict with Iraq as told by real administration sound bites. Or,as the subtitle puts it "A history of the Iraq war, told entirely in lies."