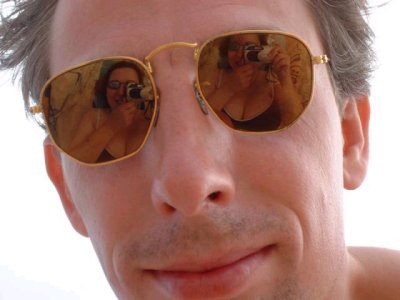 --Dreaming of warmer weather...Lena and Bjorn's summer vacation. I love this picture.

Poem of the Moment


When you're away, I'm restless, lonely,
Wretched, bored, dejected; only
Here's the rub, my darling dear,
I feel the same when you are here.

Controversy of the Moment
So at the end of the overall pretty lame Superbowl halftime show, Justin Timberlake reached over to Janet Jackson's rip-away top, pulled, and her right breast was exposed, for national tv to see for 2 or 3 seconds before they cut away. Supposedly accidentally and all that, but yeah right. If you're interested, Drudge has the story with a few photos. The most striking thing is the nipple ring she was wearing, some weird spiky sun shaped thing that circled the entire nipple. (Which makes you wonder, why would she be wearing that if there was no plan on it being seen...)

Now, I don't think anyone would think I'm a prude, but come on; if something is going to be billed as family entertainment, it should be free of this kind of crap...along with the entire PG13 pseudo-burlesque semi-sexuality of the rest of the performance. I could almost see a moslem cleric pointing to this kind of thing as Where The West Is...tits a-flying on our internationally televised sporting events. And not only that, but it was such a stinker of a halftime show...so many of this songs were from years ago, but not long enough that there's warm-and-fuzzy nostalgia or anything. Janet Jacksons Rhythm Nation was like 19991989 thanks Eric, this was probably the first work Puff Daddy--err, P.Diddy--had in years, etc etc. The only part I liked is that they had some nice integration with the (University of Houston?) marching band, especially the drumline.

Ah well. I actually missed the exposure on television, my interest in the spectacle evaporating when "surpise guest" Justin Timberlake showed up, though I saw the video of it later. (I like Justin's description of the problem: "wardrobe malfunction") And it was a nice bit of bobble...it's just annoying that it's going to dominate the conversation of what was in many ways one hell of a good football game.

Article of the Moment
An article on the differences in the corporate cultures of various countries, and how they might impact international collaborative software efforts. I always dig hearing about this stuff...it really makes you think of how many of the conventions you think of as logical and "just normal" are really rather arbitrary and culture-specific.