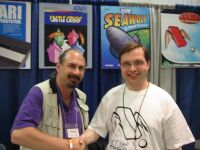 So, Philly Classic 5 was a load of fun! Sold around 30 copies of JoustPong and got to talk to a lot of people about it...the reaction was very positive. Here I am with Howard Scott Warshaw, maker of the 2600 classics Yar's Revenge, Raiders of the Lost Ark, and even the infamous E.T....(he was there to sign copies of his previously unreleased game Saboteur)

So right now I'm all energized with ideas for projects...but I have a birthday party to get ready for and a house to sell first!


I don't believe in sweeping social change being manifested by one person, unless he has an atomic weapon.

I don't know the original context, but it reminds me of a quip I came up that I've been looking for a frame for, "____ -- the cure for incurable optimism". I think "nuclear terrorism" is about as good a substiute for ____ as any...

UPDATE: Aargh. To be taken with a grain of salt, perhaps, Al-Qaeda claims to have briefcase nukes. That combined with them calling for revenge on the USA for the Israeli killing of the Hamas leader is making me antsy. Sometimes I really wonder about what a steely-eyed, completely utilitarian analysis of the cost/benefit ratio of being so closely allied with Israel is. And I also wonder if, besides a sense of justice and attempt to make up for the awfulness of WW2, if wanting to set the stage for the events described in Revelation is behind our historical support for Israel as a standalone entity.

Though you know, some of my concern is focused on "damn, gotta sell the house before things go down"...including the markets.

The first hit on Google for "al qaeda" is a translation of the Al Qaeda Training Manual. Only glanced at it, but it's odd and creepy seeing the "inspirational" language such a thing uses.

Lyrics of the Moment
...to the tune of Paul Simon's Cecilia

Ophelia!
You're breakin' my heart
You're makin' this dane
Melancholy--
Oh Ophelia!
It's makin' me sick
like poor old Yorrick
who I knew, who I knew

Ophelia!
It's changin' my tune
All the slings + arrows
of outrageous fortune
Ophelia
I'm worried a lot
about whether to be...
...or be not

I wrote that parody on a past crush's message board back in college. I still think that it's a little clever, and deserves better than to just be buried in my PalmPilot journal. Plus I needed some more post-Philly filler.