who is that middle aged man in the lobster hat? 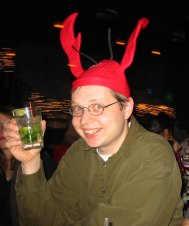 My 3-part birthday party went well yesterday. The afternoon gaming attracted a good crowd. I showed off JoustPong, and we bounced from system to system, though the definite hit of the afternoon were the EyeToy camera games... watching everyone take a turn making a goofball of themselves warding off waves of tiny ninjas or keeping UFOs spinning was irresistible.

Dinner at Summer Shack was great as well, a large group, 20-odd people. That's me hoisting a mojito and wearing a birthday-boy lobster hat. Great food, I had a tuna steak with Kim Chee and Jasmine rice, but I felt a little bad because the place ended up being a bit pricey...for everyone but me that is! Thank goodness for the birthday-boy-doesn't-pay rule...suckers! (I kid, I kid.)

Finally we headed back to my place for the booze and shmooze...probably this was the least energetic part, I think the restaurant tapped out a bit of the usual shmooze aspect, but still. There was more Eye Toy played, but then when I attempted to spark the dancing with some music and a background video (to stop the TV/sound system from shutting off) the video I picked proved too interesting, so the dancing got short-circuited. Ah well. We ended the evening with some Karaoke. We also had tasty strawberries in fudge dip and anise pizzelles.

Small Gif Cinema of the Moment
Oddly enough, we later caught the very same guy responsible for putting me in a lobster hat flailing wildly for the Eye Toy. This was sometime after he insisted on flinging a couch pillow about to help him clear the foam in the virtual window washing game. The virtual window washing game was about as much fun as it sounds, but most of the other games were great.
Link of the Moment
The Sneeze is a pretty funny blog, with a very special feature: Steve, Don't Eat It! Latest entry: his wife's breast milk. Odd that as a culture we're pretty squeamish about that...especially considering he is mixing it up with Hershey's syrup. That page is laugh-out-loud funny in parts, or at least, giggle.

Article of the Moment
The archives of Stanley Kubrick. "Attention to detail" doesn't even begin to describe it.