Unfocused Rage
So... it seems Dylan is experiencing a little bit of pent up hostility, which has turned into him having a big hissy fit for no apparent legitimate reason.

--Dylan
(2 comments)
April 18, 2004
Music Video of the Moment
LAN3 said that New York Girl in Baghdad was probably "too weird to be political" and he might be right. Still, an interesting video with a nice little tune behind it.

Nostalgia of the Moment
Before I threw it away, I thought I'd reclaim the interesting bits of this high school Spanish quiz: 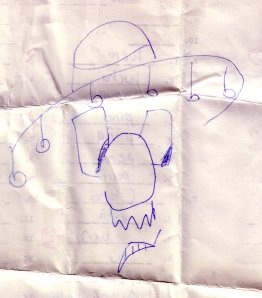 Three things learned/remembered from this:
1. I was really mediocre at Spanish.
2. My high school teacher had us use "Spanishized" versions of our names (Juan for John, etc) but "Kirk" doesn't really translate so the teacher had me use the name Nacho. (The "ir" of "Kirk" tends to be very strange to native Spanish speakers, which is why a señorita or two has been known to make my toes curl by bending my name around two syllables.)
3. I went through a phrase of printing my name in a really stylized manner. Luckily, by the time of this quiz I had dropped giving the "R" a double line for its vertical bar.
4. I would sometimes draw a guy in a sombrero. I think I liked the way the tassles would hang straight down despite the angle of the rest of the hat.

And now I can throw the quiz away...adios!

Car of the Moment
My cousin Ivan has started ragging on me about the age of my beloved Honda Civic. He sent me this car show link and the one that really caught my attention was this MINI Cooper Convertible. I've heard that the MINIs are now a kind of neo-"macho" car, which is a bit too bad. And I don't know why I have this 'thing' for convertibles; with the top down its windy and noisy and a sunny day will blind you...still, this kind of compactness really appeals to me.