--Sarah
I think that Kirk made a few fundamental whoopsies in creating Dylan and Sarah's Pointless Sidebar.

First, I am not a team player. Never have been. I don't share well. I don't think I'm selfish or mean, I just avoid groups and I despise "group-think."

Secondly, Sarah doesn't lead a pointless life. Pointlessness is my deal. Sarah needs a Sidebar of Slip-ups and Mishaps. (i.e. the black sign incident on the "Titanic" cruise ship)

SO... the sidebar needs change. Maybe a point and counter-point. Maybe it should be turned over to Sarah. But sharing in my pointlessness isn't working.

No hard feelings. It's just time to adjust.

And why does Sarah's slipup and mishaps interfere with your seperate posts? I mean, you had your fair share of not quite pointless as well... 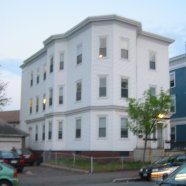 So this week I found an apartment...a really spacious place practically in the heart of Arlington Center. I think being in a neighborhood, with a little indy cinema, some coffeeshops, restaurants, is going to be really great...it's terrific to be surrounded by something other than houses. I'm not crazy about the floors of the place, newish squishy carpetting, but it's pretty huge (I could theoretically have an apartmentmate who would have their own room at the other end of the place, the only issue would be the shared bathroom), the rent is amazingly reasonable, and the location is terrific. It's still kind of funny to be thinking about starting a new life in a new place...come to think of it, I haven't picked a new place completely on my own since my first apartment in 1996.

In other news...this is going to make all the Mac fans roll their eyes, but I gave the iBook to Peterman (I had racked up a debt to him for the work he did cleaning before the Open House and helping repair the front steps) and got a darling little PC laptop with a 12" screen, about the same as the iBook. Probably I didn't give the iBook enough of a chance, but it just wasn't clicking. For one thing, I hated how many modifier keys Apple keyboards have, and how they aren't mapped the same ways as they are in Windows...there's Ctrl, Command/Open Apple, and Alt, not to mention the laptop specific "fn"...I kept forgetting which key to use to get the equivalence of "ctrl-arrow" in Windows (move cursor to the start of the next word...useful!), and I just had to think too much. Plus I wasn't crazy about the Dock...I hate how it's an always visible blend of the start menu and the task bar...I don't want to see the apps I might want to start all the time (I don't like Quicklaunch buttons or the Office start bar either.) And when I'm browsing (which was one of the main things I wanted a laptop for) I want each window to have its own entry on the Dock, I don't want to have to go to a dropdown menu list of windows. Yeah there are probably ways to configure around that stuff, but between those things and having to learn new equivalents for all the small apps I've spent years harvesting in Windows, it just doesn't seem worth it. The iBook has many cool touches, like the little throbbing LED that shows you it's sleeping, like a heartbeat or breath, some other things, but overall my cute little Averatec 3225HS (I've already nicknamed/network named it "Sliver", because it's silver and small) has captured my imagination in a way the iBook didn't.

Caption of the Moment


I should ask, before we begin, whether you're looking to repair your existing marriage or replace it?

Lately it's been dawning on me that Mo's honest would have been the latter.

Essay of the Moment
A somewhat curmudgeonly rant on the current state of affairs and affairs of the state by Kurt Vonnegut, but I think the old guy has earned it: Cold Turkey.