(3 comments)
July 25, 2004
Ramble of the Moment
Not the most original thought, but new to me...dialing up voice mail on my cellphone starts to sound like the opening notes of "Why Do Birds Suddenly Appear?" (Samsing phones remap the keys from regular touchtones to the musical C-scale). So I got to thinking about that song (mostly I know it from that Simpsons' Episode where they buy a doorbell that plays just the first line, but gets stuck and plays it over and over) and how that lyric could be read so differently, in like a Hitchcock-ripoff horror movie: "It's eerie...you show up, and then all these different kind of birds show up and start attacking and pecking at everyone's eyes! I never knew a humming bird could be so vicious....what the hell is up with you? Are you cursed?? Why Do Birds Suddenly Appear Every Time You Are Near???"

Banner of the Moment 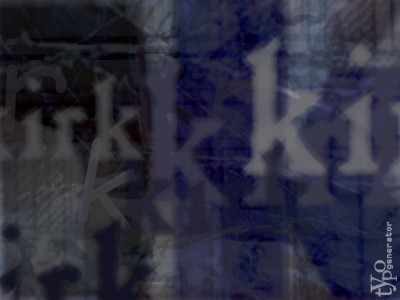 --from typoGenerator, a tool for making coolish but meaningless banners with text.

Comic of the Moment
Fleep is a very odd comic...a guy is trapped in a phonebooth surrounded by concrete, with what (he estimates) about 48 hours of Oxygen left..."Using only the contents of his pockets (two pens, a paperback novel, three coins and 20 ft of unwaxed dental floss) our hero must fashion and execute an escape plan before he runs out of oxygen". Very strange, some of the Macguyver-like details seem a little suspect, but very cool.