history
(7 comments)
August 18, 2004
12 years ago this month, it was a surprisingly temperate August in Portugal. I was visiting with Marcos and his family in Vilar Formoso for three weeks before going to college. (Marcos had been living with me and my mom as a foreign exchange student the school year before, he's an incredibly congenial guy with GQ looks. He had about 15 different gals asking him to the Homecoming Dance that fall.)

I drank alcohol for the first time in Portugal. In fact, I learned something, and I'll impart that bit of drinking wisdom to you now:

If you're ever in a little cafe in Portugal, and you see the guy behind the counter making up some weird, green kool-aid looking concoction in a large barrel-shaped glass, don't ask what it is.

If you do ask what it is, don't accept when your friend offers to buy you one.

If you do accept when your friend offers to buy you one, don't listen to the man behind the counter when he says "hey, you drink like this [mimes chugging], I buy you another!"

And if you don't ignore him...well, at this point, you're pretty much on your own.

Marcos and his brother Manny had a good friend named Baptista. The four of us had hung around that cafe, and one great early early morning drove to the bakery where Baptista used to work and got hot crusty rolls and drove back home and made up this amazing tuna stuff to put on them and played cards in the kitchen 'til dawn.

Baptista was a nice guy, a few years older than me, and a bit political-minded. He only had a little bit of English, I had no Portuguese . Together we tried to figure out the Portuguese version of Microsoft Word, which I had never tried to use before, even in English. Also, I was doodling constantly in a notebook those weeks; another time he and collaborated on some odd political cartoons about censorship; that's why I know the Portuguese word for ink: "tinta".

But neither of those were the time I want to talk about.

See, I wasn't supposed to be in Portugal for 3 weeks; I was supposed to be there for around a week and a half, spending the rest of the time visiting Veronika in Germany. Veronika and I had gone out the year before Marcos' stay, when she was a foreign exchange student. We hadn't made each other any promises about keeping it up long distance, but we were writing, and that Spring she had sent me a bit of a "Dear John" letter, she had met somebody new. A few weeks later, she wrote again and confirmed it would probably be awkward if I were to visit.

One thing I learned is that when you're young and Portuguese, living on the border with Spain, lots of times you cross the border where there are some better clubs. You drink a lot and pee on the buildings, it's kind of a tradition. So a bunch of us had done just that, and then plans got a little drunken and confused, but there was something about meeting back in Vilar Formoso at the train station. Baptista and I stumbled back and waited for Marcos and a few other guys.

I decided to tell him about Veronika, and how I still had such strong feelings for her, and how amazing she was, and how sad I was that I wasn't going to be able to see her that summer. And he opened up to me about his French teacher, this woman he had a huge crush on, but it was doomed from the start. There was something about that moment: the moonlight, the booze, the empty train station, having to stumble through phrases to find the words we had in common to tell our parallel stories of heartbreak...

Later Marcos and his friend showed up, and the friend took this picture: 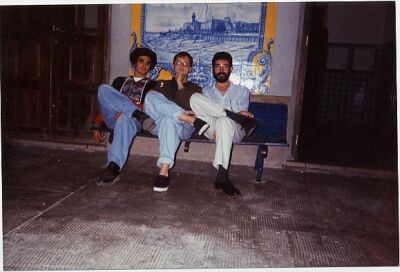 If it's not completely obvious, we're all pretty drunk. Also, Portuguese train stations have some of the loveliest murals.

The next Spring, I found out Baptista had died...I guess he had some epilepsy, and maybe there was some tie-in with former drug use, or something, I don't know. So I was shocked and sad. And a little later the Beatles' "Let It Be" came on the CD player, and I wept, like I hadn't since my father had died, like I wouldn't again 'til Mo told me she wanted a divorce.

Just one of those things, I guess.

(On a whim I Google'd up Marcos yesterday, he's been really bad about staying in touch. Looks like he's involved in some European political/humanitarian stuff, head of the youth forum for The North - South Centre of the Council of Europe. I don't know how big a deal that is, though I found some photos from 1998 with him sitting next to Kofi Annan. It's making my life feel a little trivial, actually.)

And that's what I wanted to say about that. There are more stories behind the photos from that trip to Portugal, seeing the old Roman aqueducts, going to Baptista's town to see a small hometown bullfight (the bulls aren't killed, and anyone can run across the ring...) and maybe some other time I'll get into all that. But right now I'm thinking about that night, and the booze, and the train station in the moonlight in Portugal.