what is space and time and physics? 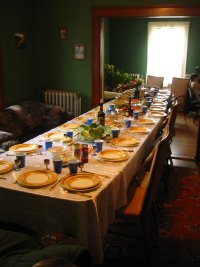 So yesterday I was invited to Ksenia's mom's birthday dinner, a traditional Russian feast...so much terrific stuff to eat and nice people to eat it with. Here's the table before everyone sat down, but you can imagine it filled with people, there were almost 30 place settings. And then there were all these courses of tasty food...many of the appetizers were fish-based, from caviar on hard boiled egg halves to salmon to a salty herring spread. There were so many toasts... One of the things that surprised me was that people cleared out and mingled between the appetizers and the main course and then again between the main course and dessert...a few folks went to grab a smoke, but still, it surprised me since usually in the big meals I've attended if nearly everyone left the table it meant the meal was over.

Metaphysics of the Moment


Basically yes, of course, but what is space? What is time? What is physics?

He was being asked if, in his opinion, SpaceShipOne did indeed reach space when it reached 100 kilometers. (via Slate)
I'd hate to hear this guy when some waitress asks if he wants a refill on his coffee. "Well yes, obviously, but what is coffee? What is this mug? What about eggs that are over-easy?"