history
(3 comments)
March 20, 2005
Photos of the Moment
I took a lot of really bad photos this party...I couldn't really see people on the little screen well enough to frame shots. Also, the lighting made it easier to see the dust on the lens.

One highlight of the evening was a Spongbob Piñata! I filled him with candy and toys: hershey's kisses and reese's mini peanutbutter cups, some lousy mints, shamrock eraser heads, happyface squeeze balls, cheap koosh-like critters...(Jim and Andy amused themselves for the rest of the evening with "Hey Kirk, what's that on your face?" The answer being one of those little balls that they would then hurl at me. I guess that's what I get for agreeing with a "you must take a shot before taking a swing" rule for Spongebob.) 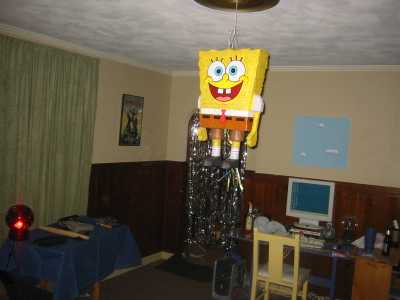 This is Peterman Pummeling the Piñata! Poor Spongebob. There was some debate if this counted as "gay bashing", but we decided it was an artistic statement against the commercialization of childhood. In any case, there was candy and toys to be had...you can see a few being flung from a hole in Sponge Bob's back. So my photo had great timing at least. 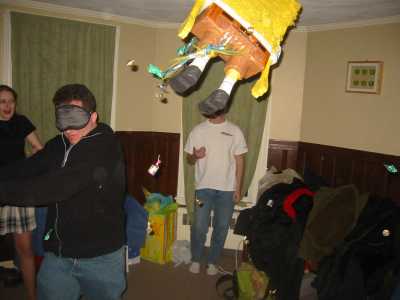 Ksenia, myself, and Jane, and my books. Only Jim's poor framing saves this from being an utterly utterly generic party photo, but I'm not going to pass up the chance to get a snapshot between two cute gals. (Actually the books were, surprisingly in retrospect, the only victim of errant piñata swings...) 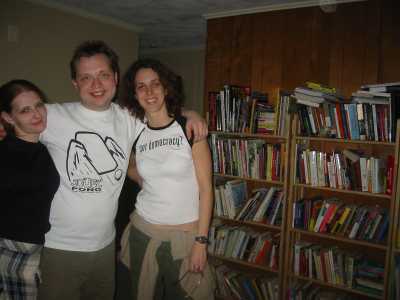 Ksenia did so much work doing the food for the party...we had a Russian caterer for the pork kabobs, but the rest (this kind of blintz-like pastry, cute little hamwiches, a julienne chicken casserole, salad, veggies and dip) was handmade by her, and she organized all the kitchen stuff. She also surprised me with a cake...and even got them to put little alien bills on it! Here it is with Erin, who was the other Guest of Honor. (We watched some of her tapes from film school, that was pretty cool.) 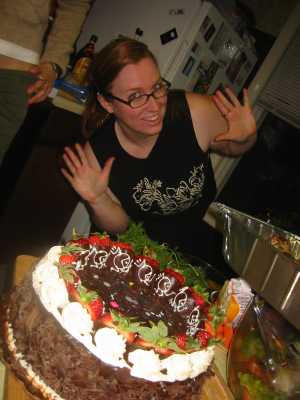 Overall the party seemed like a big success. Some videogames in the afternoon, then a lot of great food, this Karaoke game (it rates you based on how on-key you are) and DDR, a lot of shmoozing in the middle room, Erin's films, the piñata, some dancing (though it was kind of ruined by "too many DJs spoil the mix" and a lot of cut off songs...there was a techno contigent, but a lot of people found that too hard to dance to, so it was kind of a mishmash.