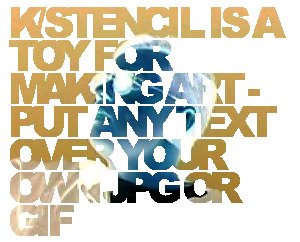 --Whee! I finally finished a public (perpetual) beta of k/stencil, a Java toy that lets people upload their own images and overlay text. You can upload images, tweak to your heart's content, and then share in a public gallery. Give it a shot! Eventually I'd like to run a contest on loveblender with this... feedback on the interface is welcome, though I know it's a little clunky, and that's probably not going to change.

Thought of the Moment


People are the only animals to voluntarily ignore their sleep needs, according to Van Cauter. They stay up to play, work, socialize, or watch television. However, she adds, "We're overstepping the boundaries of our biology because we are not wired for sleep deprivation."

The article (pointed out by Bill) had some points about the biological differences between very heavy people and people of healthier weights...I guess the trick is acknowledging the challenges obese people face while still acknowledging their responsibility to at work at their health.

Anyway, I'm not sure how proven it is, but I love that idea that humans are the only animals to want to stay up late...it's a semi-defintion of humanity that goes well with my notions of how stuff that's "interesting" is axiomatically good in my value system. (Especially since now that it looks like that line about "Man is the only animal that laughs" probably ain't true.) Seeking out "interesting" stuff is at the root of our humanity.

Congressional Idea of the Moment
2 months more of DST every year? Sign me up! I don't care if it's like .05% of our daily energy needs...I want more light in the evenings!

In Cleveland, pretty far west in the Eastern time zone, we had lovely long, light evenings. Yeah, in the winter I had to trudge to school before it was light out, but it was worth it.