Kirk Jalbert's piece is named Illusion/Elusion and the description is as follows:

Why do outdated technologies proliferate in mainstream culture? As a member of the first generation of virtual-capable human beings, my body has grown proprioceptively comfortable with its on-screen counterpart. Interactive experiences of the past, once difficult, are now navigated with ease. Physical and mental reference points have been created. We have evolved, yet still return to earlier virtual experiences sometimes bent by the interference of distorted memory. Illusion/Elusion is an exploration of these nostalgic fascinations through elementary interactions with an Atari2600-based system.

Phew, quite a mouthful. Answers.com reports that proprioception is "The unconscious perception of movement and spatial orientation arising from stimuli within the body itself." Hmm, ok. "Interactive experiences of the past, once difficult, are now navigated with ease" -- interesting. At first I thought he meant that modern games are easier, but actually he means the old games are simpler than their modern-day counterparts.

Anyway, onto the work itself. (I didn't ask if it was ok to take photos or not, so I took these on the sly. Hopefully I won't get a nastygram about all this review...) 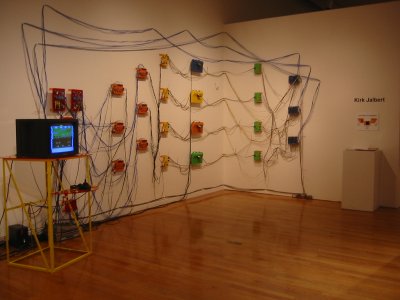 The set up at Aidekman has 3 TVs on stands on one side and then a mass of assorted, repetitious hardware (including some brightly painted Atari 2600s) attached to the nearby walls with lots of strung wire connecting it all. 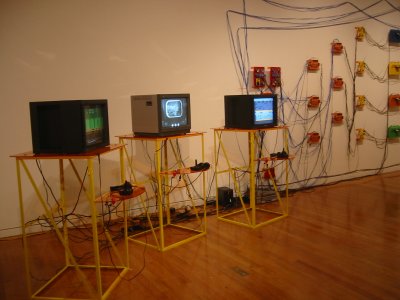 Each TV has a good ol' Atari CX40 joystick, headphones, and 2 buttons (one "illusion" the other "elusion"). The TVs switch between Pitfall!, Frogger, Pac-Man, and this old black and white video from the 50s or something. The "illusion" button seems to act as a reset for the game, and the "elusion" seems to switch to the video, and also sometimes the TVs seem to switch of their own accord. The reception was really terrible on some of the TVs, it wasn't clear if this was on purpose or not. 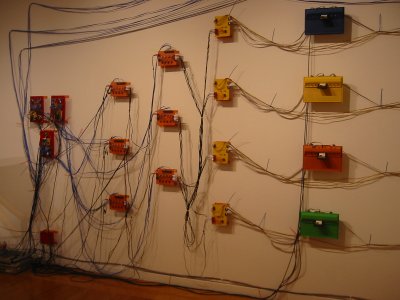 The hardware was interesting to look at. It produced pleasing, cricket-like clicks which seemed to correspond with the switching of the TV displays. 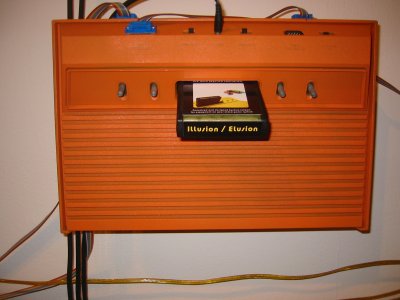 The Ataris were brightly colored, and each had a rebadged cart in its slot. Not the sharpest looking homebrew stickers I've seen, but hey.

So, that was pretty much it. I suppose people's reaction to the work will have hinge on how they feel about modern and interactive art in general. (I generally like interactive art just so long as the viewer can actually tell that the work is responding to them and not just noodling along on its own.) Personally, I think "Art is what you can get away with", and this was reasonably interesting and visually pleasing, so I thought it was pretty good over all. On the other hand, it wasn't engrossing for that long...and of course some of the appeal was just playing a bit of Pitfall and Pac-Man, which I hadn't for a while. (And I probably have much more recently than most of the intended audience.) I suppose that ties into the theme of "technological tourism", the simple nostalgic pleasure of these old games. I think the whole 2D iconic representation of the games is a rich territory that Kirk Jalbert downplays in favor of the "it's just nostalgia" vibe. Also, the title "illusion/elusion" is pretentious as all hell...

So I give it a thumbs up. It gives me hope that someday if I ever get around to my "Myth of Sisyphus" 2600 game and make or followup a few contacts, maybe I can get some gallery time somewhere...