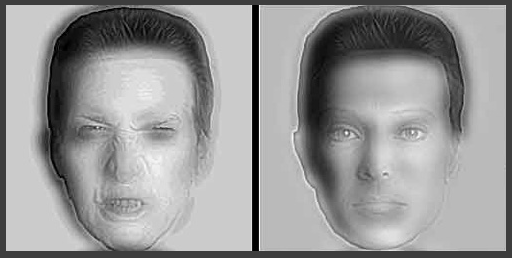 
I made this applet to better view the Mr Angry & Mrs Calm Illusion as presented by Ian Rowland, but the original is by Dr. Aude Oliva and Dr. Philippe Schyns (see this MIT page for more cool and related stuff.)

Move the mouse over the image to shrink it. As it shrinks, the faces seem to swap places! No other image processing is done except the shrinking. Mr. Angry on the right becomes calm, and Mrs. Calm on the left appears angry. It's an amazing illusion, I think the applet makes it a little more fun to play with.

Article of the Moment
Neat little Slate Explainer about the spelling of the Red Sox and White Sox...I had no idea it died into that "spelling reform movement" near the end of the 1800s.

Laffy Taffy of the Moment


Q. What kind of tea can be hard to swallow?
A. Reality

Site Update of the Moment
I rejiggered by sidebar with the goal of making it easier to get to the interesting stuff. You can compare it old one and let me know if you think it's an improvement. I'm open to suggestions, especially for the section headings.