(5 comments)
March 2, 2006
Dupont Circle is one of the most confusing roundabouts I've ever seen, with like 3 or 4 lanes around, but they criscross. The confusion extends to the pedestrians as well... it's kind of distracting seeing "time left before traffic resumes" counters set to different values at a single crossing...32 seconds to cross the first part but only 12 for the second in this photo though it's a little hard to see. 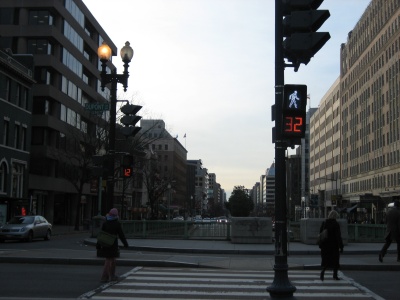 Also, a very deep Metro station... this shot of the entrance from the inside doesn't show how deep it goes but I like it anyway. 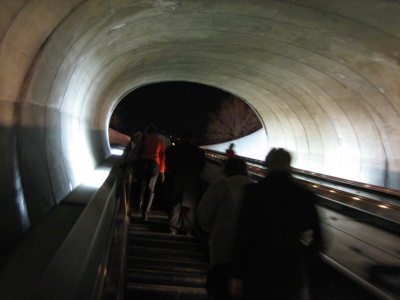 Passing of the Moment
Just got word from the compsci department at my alma mater that Prof. Schmolze has passed away after a fight with cancer. I didn't have too many classes with him but he seemed like a great gentleman.

And now I'll never be sure about this one incident I had with him in an AI class...he had just told us about some bit of AI logic that was named after it's creator (Unfortunately I can't remember what that was.) But then he was talking about another construct, representing a logic statement that would lead to a contradiction, called a "NOGOOD". And I asked, gee, was that too named discovered by a Professor or Doctor Nogood, and so it's named after him? His response was along the lines of "heh heh, no, see, we call them 'NOGOOD's because they're No...Good ...See?"

And so now I'll never be quite sure if he didn't catch the dumb little joke I was making, or if it was just a dry-as-kindling sense of humor that had him playing along...