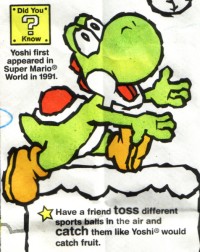 So on the trip to New Hampshire my mom grabbed a Happy Meal. It still seems kind of funny to me that their now often more like "Happy Sacks", though I think I've seen the "traditional" box recently.

So this Happy Meal sack was imprinted with Nintendo characters (and one frolicking Ronald,) one of the scarier cobrandings conceivable, even though the toy had nothing to do with either. But the text was more about the fun of and need for exercise and fitness than anything video-gameish. (Which, considering the sources, is either ironic or an exercise in avoiding lawsuits.)

Anyway, all this snarky buildup is just to support the observation that

Have a friend toss different sports balls in the air and catch them like Yoshi® would catch fruit.

is a rather odd suggestion, given how Yoshi's MO for catching fruit is to lash out with his giant tongue and, more often than not, gulp the fruit whole.


I have arthritis in my fingers, and picking my nose helps stretch the finger joints and keep them flexible. Oftentimes I switch fingers -- even hands -- mid-pick.

I hate the Yankees but actually I don't mind Joe all that much.

Politics of the Moment
I was a bit surprised that all 3 state ballot questions failed. There was 1. should supermarkets (and convenience stores, as opponents were quick to point out) be able to sell wine, at the local community's discretion, issue 2 was an interesting idea to let people who were the candidate of multiple parties show up multiple times on the ballot, so that someone could vote for them as, say, "the Green party candidate" and send a message without splitting the vote (a solution that is a bit of a hack, bu apparently ballots are confusing enough for voters) and 3 was could independent in-home child care providers collectively bargain with the state.

I guess I tend to default to "Yes" on these kind of things, figuring if someone cares enough to muster up support, it might be worth considering (I still read and pondered the voter's guide) but I wonder if the default is "No" for many voters, if there's a fundamental conservative (in the original sense of the term) streak there.

This state, or at least the districts I've voted in, use optical vote readers (sort of like SAT-fill-in-the-bubble, but with Sharpie-like pens) which seem like a terrific blend of being easy to use, being easy to count electronically, and leaving a paper trail to make large scale fraud take much more work.

And now the Democrats get control of Congress, and maybe the Senate. I'm sure they don't have a brilliant plan for Iraq, but neither do the Republicans, and it was more their mess than the Dems. Between that and the corruption and utter smear tactics of the Republicans, I'm glad to see a bit of a shift.