i'm just glad to be here. i just want to help the club any way I can.

Just joined the forces of HDTV. A little early Christmas gift. Pretty amazing! As long as the broadcast is in HD, I find myself watching the craziest shows. Never knew I cared about how the Pyramids were built or details of bugs ... the pyramids were pretty sweet actually (the man-power it must have taken would have been awesome to witness).
--Beau
(4 comments)
(4 comments)
December 18, 2006
Oof-dah. Between the holiday hectics and back-to-back business trips, it's a challenge to make this site interesting... my apologies for that!

Baseball of the Moment

I guess that might have been some of the inspiration for that bit in "Bull Durham" where the rookie gets taught all the happy talk... I couldn't find the whole routine online though.

Billboard of the Moment 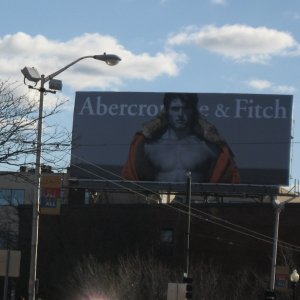 After actually thinking a few months prior that it seemed like that Abercrombie model in a billboard at Porter Square would be getting pretty damn cold, I was entertained that they gave the guy a coat. (Someone else was less amused, this board replaced the same one that had been vandalized with either tomatoes or maybe a paintball gun.) Still, I think the funniest take on the whole "why are we using naked male posers to sell clothing even to men" thing was that one men store's ad that showed two shlubs playing some touch football, running circles around the black and white models too busy posing with footballs in slo-mo to actually do anything.