eat food. not too much. mostly plants.

(7 comments)
January 30, 2007
Decluttering stumbles on. Sorry if you all are sick of hearing about it here.

I realize that I've lost some of the sense of "NO MERCY" that I had last week. I stacked up 3 computer keyboards. One is a Microsoft split keyboard that I will likely take into my new job, so it gets a pass. The other two are normal, flat ones; I think they came bundled with PCs but I put them aside in favor of the split ones. NO MERCY! When you A. don't need it and B. could buy a replacement for $4 at Microcenter if you DID need it, there's no way that that item is "paying its rent". (The question then is, do thrifts accept them or not.)

Almost as tough: old broken laptops that would cost more to repair than to replace. Especially that little iBook that was in most respects a better web-browsing "living room" machine than any PC. NO MERCY! Just a question of how to best dispose of it.

My Ever Lovin' Mom wrote "I'm still cheering on your de-cluttering. Your newly organized home should be a nice jumping off point for your new job." That's an encouraging way of thinking about it.

Article of the Moment
"Eat food. Not too much. Mostly plants."

That's the lead-off summary of Michael Pollan's article Unhappy Meals. (Here's the bugmenot page for NY Times.) I'm glad Nick B LJ'd it, I didn't pay enough attention when it was boingboing'd.

There were a lot of interesting ideas to take away from the article. This ties into a conversation FoSO and I had the other week, where she encouraged me to start trying to get some kind of rudimentary cooking skill going. Of course I have to admit that I don't appreciate food enough; with my "interesting"-based mortality, I need to make a deliberate effort to invest the money and time that eating well would require.

Sometimes I think back to the "caveman diet" my mom was on when they were testing her for allergic reactions. Is that a better way to be? The article talks about how many "traditional cuisines" seem to have the best of both worlds... 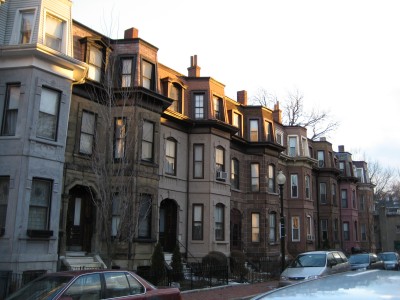 --Not a terribly impressive photo, but I enjoyed realizing that every rowhouse on this stretch of my Aunt and Uncle's street is a different color of stone. Across the street, it's all just brick.