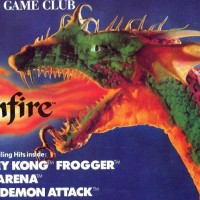 My first foray into the wonder world of Atari games was a kind of obscure Columbia Home Arcade... you got the basic system (a rebadged Coleco Gemini, an Atari 2600 clone) and then they sent you a catalog/poster every month, like those record clubs but for games. They offered some games that are now considered pretty rare, like Spy Hunter and Donkey Kong Jr. (heh, I just realized DK Jr. was one of the featured items. I remember getting that for my birthday... not sure if it was allegedly from a grandparent or from my mom, but come to think of it it probably came through that poster. Which is fine. I loved Donkey Kong Jr, in part because of the character in the Saturday morning cartoon. I dressed up for halloween one year as him, in fact.)

Batari BASIC, a simplified programming language for writing 2600 games on the PC, has its own website, replacing my old "semi-official" one that I never did enough with. Also, it's finally at "version 1.0" after kicking around beta for a while.

Sometimes I think... if I had this language when I was writing JoustPong, I could have saved a lot of time, though the end result wouldn't have been nearly as impressive.

Then I think, that might've saved my marriage to Mo. Or... not. I might be mixing up cause and effect, that it was just my pursuit of personal projects in general in lieu of the couple-interest she was (quietely, almost secretly) craving.

Of course, I'm retroactively disappointed in myself that I never got into 8-bit programming more deeply, like with the C=64 Programmer's Reference Guide. I never did anything with the sprites, and my few attempts to get into Assembly Language back then never came to anything...

Finally, the amount of exploration these folks have done of the old N64 game Goldenye is pretty amazing.

My goodness. Today's entry went on some odd little tangents there.


"The trouble with computers, of course, is that they're very sophisticated idiots."