Barista: Would you like to try a cappuccino muffin?
Customer: No, thanks. I don't want to start my appetite yet.
--Starbucks, 45th & Broadway

I didn't think that was funny, because I could totally relate... you can get by with just coffee in the morning, and oddly if you eat something you might still be ready for lunch at about the same time, or even earlier.

Photo Work of the Moment
So the other day we were walking, and I snapped one of those typical shots of the church and the Hancock at Copley, a little cooler than average because of the reflection of the clouds: 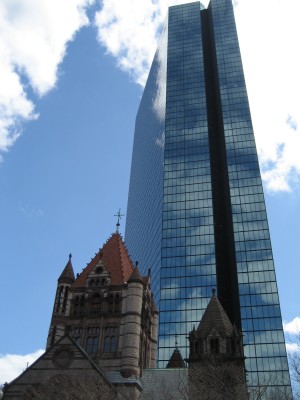 I then remembered FoSO borrowing my Kodak DC-20 (arguably the "Brownie" of the Web's toddler years) back in the day and taking a series of photos from her office building, which I then stitched into a collage: 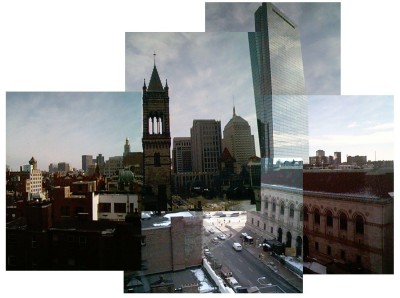 click for fullsize
Funny to realize that this image is over ten years old, which means A. I've been doing digital photos for a while now, and B. I've been in Boston for a long time, and so finally may be feeling a bit more rooted. Oh, and, C. DC-20 images really haven't aged so well. It was a nifty minimalist camera back in the day, but...


Tim Crane thus describes the basic two requirements for an emergentist position as 'dependence' and 'distinctness': 'mental properties are distinct from physical properties'. That some kind of dependence relationship exists seems hard to deny: destroy enough molecules within a cell and you no longer have a cell; kill enough cells in an organ and the organ ceases to function; watch your discussion partner ingest enough alcohol and his sentences will cease to be coherent.

Admittedly not the funniest... I guess it caught my fancy because of its resemblance to this Monty Python bit, (though less racist and sexually explicit) in a fairly serious and dense tome.

Passing of the Moment
Oh, huh... BC-Creator Johnny Hart died. It's weird seeing his early stuff when he was a bit cutting edge, and not just in the weird "Fundamentalist Wacko" way.