they will surprise foes below by hurling upon them deadly thunderbolts

April 20, 2007
I thought I always preferred using larger headphones with an iPod, but, it turns out, not while walking. They're a bit too isolating, while I appreciate the music I don't like being quite that removed from my environment. (And for what it's worth, I feel like I'm being less of a hermit while reading on the subway as opposed to iPodding up.)

The Minuteman Bikeway is long and very straight, at least between my place and the subway stop. I kind of end up wishing for these novelty sunglasses I had when I was younger, "spy" glasses that had the extended outer edge of each lens mirrored so you could see behind you. That way I could keep an eye out for bikes coming up on me.

Predictions of the Moment


Aerial War-Ships and Forts on Wheels. Giant guns will shoot twenty-five miles or more, and will hurl anywhere within such a radius shells exploding and destroying whole cities. Such guns will be armed by aid of compasses when used on land or sea, and telescopes when directed from great heights. Fleets of air-ships, hiding themselves with dense, smoky mists, thrown off by themselves as they move, will float over cities, fortifications, camps or fleets. They will surprise foes below by hurling upon them deadly thunderbolts. These aerial war-ships will necessitate bomb-proof forts, protected by great steel plates over their tops as well as at their sides. Huge forts on wheels will dash across open spaces at the speed of express trains of to-day. They will make what are now known as cavalry charges. Great automobile plows will dig deep entrenchments as fast as soldiers can occupy them. Rifles will use silent cartridges. Submarine boats submerged for days will be capable of wiping a whole navy off the face of the deep. Balloons and flying machines will carry telescopes of one-hundred-mile vision with camera attachments, photographing an enemy within that radius. These photographs as distinct and large as if taken from across the street, will be lowered to the commanding officer in charge of troops below.

I love the steampunk / War of the Worlds feel of that one.

Coinage of the Moment 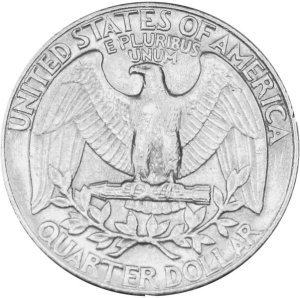 For some reason the eagle on the back of a quarter caught my eye, and I wondered what it had in its talons... on a worn coin, it looks like something architectural, but this page on its design didn't say. But now I can tell that it's a bundle of arrows. Duhhr. (Conservative stoner hippy: "Have you ever really looked at a quarter? I mean, really looked at it?" And don't get him started on the back of a dollar.)