April 29, 2007
I'm up in Rockport helping EB again, so this is just a placeholder, an assurance that my "daily" humanistic/spiritual ritual will get done.

Maybe doing articles in advance is cheating in that regard, and really I'm just weirdly obsessed about not missing a day.

FX Suit of the Moment 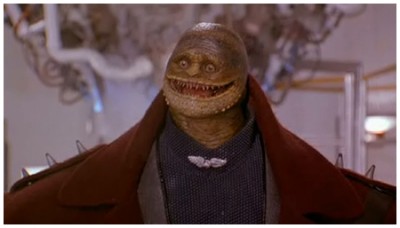 I was happy to see that this "goomba" from the Super Mario Brothers movie just snuck into the Carboard Monocle's Top 20 FX Suit list. As they say

Okay, so we may catch some flak for having this on the list. Though the head sculpt and the animatronics in the face are impressive, the overall design of the creature left the average viewer wanting more. Not to mention the disappointed Mario traditionalists that wanted it to actually look like a Goomba from the game. All that aside, there was something about these that stuck with me. They were big dumb oafs, and watching a pack of these bump into each other and sway to music is just plain funny.

The goombas were the 3rd best thing in that movie, right after the little windup Bob-Oms (scroll to the bottom) and Samanth Mathis' purple-to-white dress I kisrael'd about before.

Also, the soundtrack was decent, despite of or because using US3's "Cantaloop (Flip Fantasia)", like every other movie made in 1993-1994.