funny
September 2, 2007
So yesterday Evil B and I worked on his driveway. It was unpaved gravel but with enough weeds that it was starting to look like an extremely poorly kept lawn, virtually enough to give careless beachgoers an excuse to block it while parking.

Well, we took care of that. 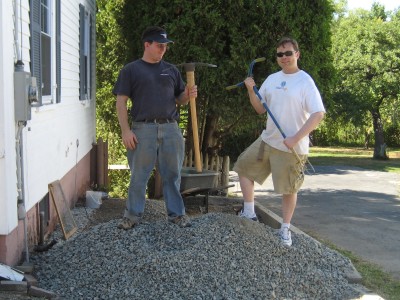 The first part was the weeding. For the first stage we broke up the worst areas with the pickax and one of those twisting garden claw things, both shown here. Eventually we started shoveling hunks of gravely landscape into a sifting screen over a wheelbarrow, shaking furiously and picking out the roots and plant bits. Later we had to shovel and rake to redistribute the new gravel to cover the turned over space.

It was a lot of heavy and dusty work. The photo above is him and me standing after the new gravel was delivered. In all we had about 2 1/2 "scoops" delivered, a scoop being about a cubic yard, which is about a ton.

A ton of gravel is only like 30 or 40 bucks! I am totally in awe of our society that you can buy a ton of anything useful for that kind of money. I almost want to get a scoop delivered to my apartment, just so I could have a ton of something.

Physically it was a tough but satisfying day, and the end result was a huge improvement. In the evening we head for a reviving swim at the beach, braving the chilly water for a swim to the raft anchored offshore. It was kind of cool seeing Evil B pass on the neighborhood lore of the raft to some groups of younger people who later arrived: the game where you stand on the edge with your heels hanging off until the small ocean harbor waves throw you off, and then the ritual of diving to the bottom and returning with handfuls of sand to show that you've done it.

(Evil B mentioned that he liked the mix you see in Rockport. The first group who joined us swam over from a sailboat, 2 very young boys, 2 older girls, and a father-y figure. Later it was 3 boys, sweet natured kids who might've been from the wrong side of the tracks.)

Exchange of the Moment
[Evil B explains that he's going to break up some ground with the pickax and I can then move in with the Garden Claw to rip it up. He begins swinging the pickaxe with great vigor:]

Turns out he was addressing the ax, not me...
You had to be there but my nervous comment struck him as pretty funny.