toy
(9 comments)
November 4, 2007
Jimminy crickets! If I didn't have one of those auto-set alarm clocks, I never would have know the clocks were being pushed back today.

My surprise helped spur me into making the following: 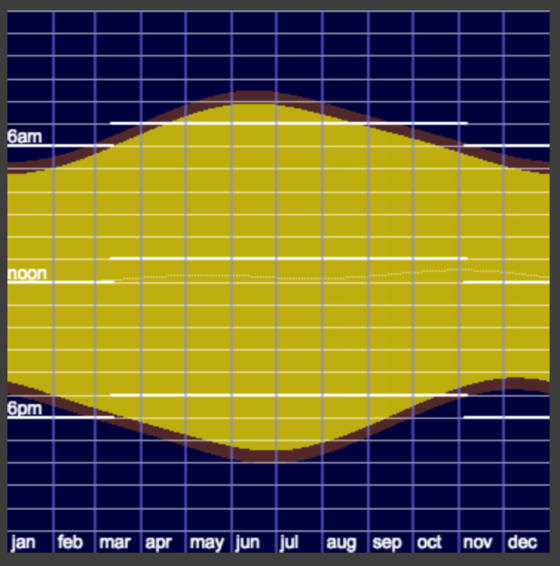 This is probably one of the least interesting java programs that I've posted here, but it's something I've been meaning to make for years, literally. It's a simple graph showing how the sunrise and sunset times shift throughout the year. (As an afterthought, I added "civil twilight", which is the dark curve behind.) The data is for Boson and comes from the US Naval Observatory Data Services page.

The red line indicates where you are in the year, and is the only remotely dynamic part of the program. (I ignore leapyears, so for 2008 it will be off by a pixel.) The yellow lines mark 6am, noon, and 6pm, with the appropriate daylight savings break. UPDATE: for LAN3 I added a dotted line indicating the midway point between sunrise and sunset.

I was kind of hoping the curve would be a bit more like a compressed sine wave, a visual confirmation of how quickly the change from long days to short days seems to happen once it gets going. It looks more linear than I expected, though some of that is a matter of scale, there might not be a single correct answer for how to scale a 365-day year against a 24 hour day. (Which is an interesting philosophical, or psychological, or design point; on the one hand, a year is so much longer than a day that it seems like the y-axis should be much longer. On the other hand, you can experience the length of a single day, and feel the loss of an hour of daylight, in a way that you really can't with an entire year.)

Sports Fan Trashtalk of the Moment
Big football game today! First time two undefeated-in-7-or-more game teams have faced off. And after, there will be one undefeated team in the NFL. Slate had a high-spirited debate between a Pats fan and a Colts fan. My favorite part:

This isn't the 2006 Patriots receiving corps, which was constructed like a fifth-grade diorama: a Little Tikes figurine holding down the slot, a broken G.I. Joe guy slung out wide, and glitter-soaked cotton balls used to create "atmosphere." The 2007 Pats receivers are a thermonuclear weapon with a seven-second timer. There are three colorful wires coming out of that bomb: Welker, Stallworth, and Moss. It's like an action film: Can the Colts clip all three of those wires or get to the quarterback before the timer runs out? I don't think so.

The diorama bit made me laugh out loud. Of course I'm biased, but I think the New England fan was a much more lively writer than the guy pitching the Colts.