(6 comments)
November 14, 2007
Wow. Major Boston-area teams (i.e. including the "New England" Patriots) in sports played with a ball (i.e. excluding those stumblebum Bruins) haven't lost a game since Game 4 of the ALCS, back on October 16. Since then, the Sox took the next 3 games and swept the World Series, the Patriots added three to their lossless season and the Celtics with their "big three" have come roaring out to a 6-0 start.

Not to tempt Murphy by pointing that out, but that's kind of crazy! Boston is really fortunate right now.


And thus we learn fascinating things. Did you know, for example, that Adam is responsible not only for the fall of man, but also for the creation of venom? It didn't exist in the Garden of Eden, because, well. Why would it? Weeds? Adam's fault. Carnivorous animals (and, one assumes, the occasional carnivorous plant)? Adam again. Entropy? You guessed it: Adam. Think about that, won't you; eat one piece of fruit and suddenly you're responsible for the inevitable heat death of the universe. God's kind of mean.

Also from the Splutmeister: The 25 most baffling toys.

Snark of the Moment
Boingboing had a bit on the One Laptop Per Child Give One/Get One program that I'm participating in. It had this picture which captured the cross-cultural nature of the endeavor: 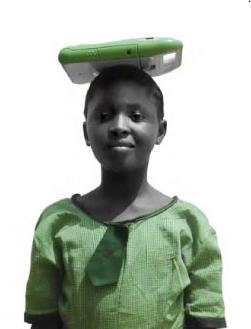 I'm no expert, but that girl clearly has no idea how to use that computer.