(2 comments)
November 17, 2007
I really don't think Apple is that great at UI, or at least they don't put out much effort in iTunes. (I've probably griped on similar themes before.) Just little touches, like how if you're sorting by star-ranking, and then rerank a song, it jumps away from the mouse to its new homes, instantly, and if you're worried you misranked it, you have to hunt it down with the search engine and check. Or if you rip a CD it knows nothing about the album, artist, etc are blank. To then enter the information by hand, you have to click in this special "magic area" on the left of the blank space. (If they had a placeholder, as they do for the songs ("Track 01" etc) then you could click anywhere on the placeholder.

Seriously. Even as I try to give groups the benefit of the doubt in turns of technical or alternate-use considerations I'm not aware of, sometimes it feels like I'm the only person who cares about good UI.

Speaking of that, would you trust your web design to this man? 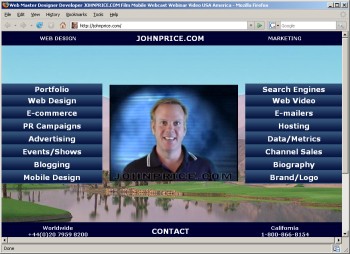 Just wondering. Not sure what I was googling for when I found that guy, but I dig the late 90s vibe of it all, the effort to reach out to non-techie businessmen (note the golf course in the background) and collaborate on them to make sites that ignore the new traditions of what websites look like and make it feel "familiar" like TV. (No hard feelings, Mr. Price, maybe this link will help with the Google placement in some small way...)


My soul, do not seek eternal life, but exhaust the realm of the possible.

Sports of the Moment
Robert Weintraub on how NFL teams need to get back to basics. I was only a bit aware of how simple the Patriots' offensive scheme had become (though a little nervous about them becoming dependent on Randy Moss -- but then again in other situations it still seems like Brady is mixing it up, receiver-wise.) Makes me think of Vince Lombardi's "We will give the opposition our game plan and we will still beat them, because we will out execute them." I'm sure it's not as simple as that, but still. It's nice that part of being really smart is knowing when to be simple, elegant, and a bit dumb.