Blog of the Moment 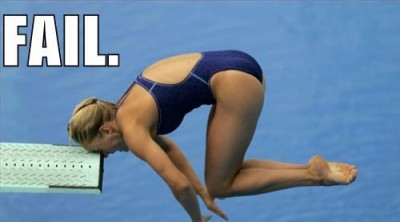 --from the FAIL blog - the Fail macros are kind of a cousin of LOLCats. Funny stuff, if sometimes in a kind of mean way.

Huh. I need to figure out how to make that kind of lettering, with the outlines...

Bryson of the Moment
So Bryson talks about Thomas Midgely Jr., an Ohio inventor ("with an instinct for the regrettable that was almost uncanny") who brought us both leaded gasoline (great for stopping engine knock, but does terrible things to people, especially children... and the industry's coverup makes the tobacco lobby look like a bunch of saints) and chlorofluorocarbons, aka CFCs (again with a laudable goal, a stable, nonflammable, non-corrosive, and safe-to-breathe gas that might have prevented a 1929 refrigerator leak at a Cleveland Hospital that killed over a hundred -- but the damage these things have wrecked on the ozone layer is horrendous!)

Unfortunately, it's hard to make a punchy illustration for the FAIL of CFCs and leaded gas...