I now have the technology and 'net access to try travelloging in real time. This likely means my observations will be extra facile and I'll be less likely to know if they represent just what I see, or Japan as a whole. And so it's going to be more raw and mundane than if I were pulling it together after. So, those disclaimers out of the way:

My connection flight to Chicago got changed to a sidetrip to Washington Dulles. I got to stop at a mini-Fuddrucker I remembered from business trips, and my final arrival in Japan was only 2 hours later than first scheduled. Plus I got to see this ATM: 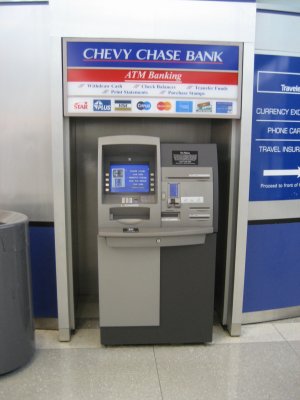 I'm sure they get these jokes all the times, but man! Who let him have a bank? (But then later when I saw the current Yen/Dollar exchange rate, below 100 for the first time in a long while, I myself felt ready to sing Moon River...ZING!)

The flight on ANA (All Nippon Airways) was fine. Inseat video technology has improved since my last international flight, or Japan does it better. Jet Blue had DirecTV, but on this flight every chair had its own video library, so you could pick from about 20-odd films, pause, rewind, etc. There were also some basic time killing video games and the old standby channels of music etc.

My last minute seat change had put me in the "families with kids" section, but I admired the little bassinet things the attendants could fasten to the wall in front of the seats: 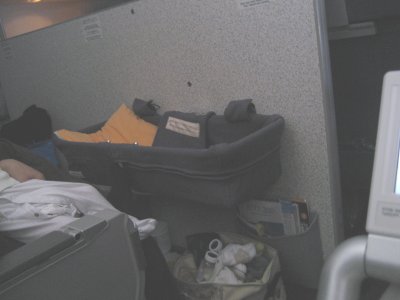 My friend Josh met me at the airport. He's lived a total of 9 years in Japan, and lives just outside of Tokyo with his wife Tomomi and their young daughter Erin. We took a few trains from Narita (an airport built kind of against the will of the rice farmers who were living there, but certain concessions were made) to his place in Chiba. The train seating was "subway" style, but often the seats were nicely padded and cushy: 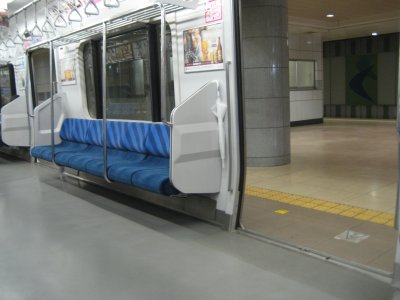 Same car a bit later, giving more of a feel of it: 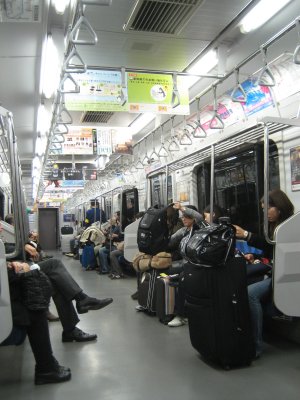 Josh describes the vibe of Chiba as being roughly "Coolidge Corner"-ish. I could see that, with the caveat that stores and buildings tend to be brighter and more garish than their American counterparts. Here's Chiba on a rainy Friday night: 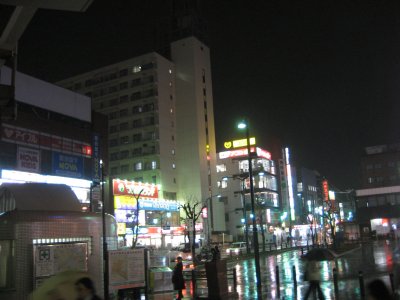 A few other notes: